Will it be though? I mean I only count Everything or Nothing (which sucks for those people who plan to get the steelbook because it only seems to be available as an exclusive to the complete set, the only hope is that it's somehow on the Skyfall steelbook reissue as an extra feature) and the Spectre featurettes which, by the way they've gone about things in the past will be 20 minutes, if we're lucky. Remember that BOND 50 bonus disc? Total garbage. My hope for any new features is really slim but I'm more than happy to be proven wrong. Hell, this steelbook news is fantastic! I've been hoping for Die Another Day deleted scenes for years, and stuff from other films. The Quantum of Solace directors cut? A comprehensive archive of trailers and tv spots? On set stuff, Documentaries that I'd love to see have a Blu Ray release (40th Anniversary BAFTA with Michael Parkinson, loads of stuff aired on tv over the years) They have a good amount of stuff to beef these sets up and yet, I'm honestly just expecting them to release the exact same discs from the last set - which was pretty much the ultimate editions anyway. 9 years ago. They've done it time after time. New packaging. Old stuff. Expect all the new stuff to be thrown on the bonus disc. I bet they don't even touch the other discs. (and I bet that Quantum of Solace and Skyfall will have an out of place title menu, compared to the first 21 films)

Typically I feel they have reissued once and then upgraded. So I see this as the bond 50 reissue. Maybe when bond 25 we will see new transfers for download and maybe uhd blu ray too.

On the extras I think it's where home video is at now. It sucks but the studios really only care about new film releases. Catalog titles mean little to the studios and sales are poor at his point. So this explains what is happening. The home video division is now run by the theatrical divisions too.

Interesting that they're including For Your Eyes Only in the steelbook release.  I guess this is now official confirmation (not that any was really needed) that it was indeed Blofeld in the pre-titles.

And I wish we had a Steelbook for one actor each at least - very Connery heavy.

And I wish we had a Steelbook for one actor each at least - very Connery heavy.

That was my initial reaction as well.

Seems like they're only doing the SPECTRE films and the Craig films to tie in with SPECTRE.  With that being the case, though, it's kind of curious why they didn't include Dr. No as part of the release.

Planning to sell my Bond 50 Set on Ebay and pick up some of the steelbooks instead.  Been hoping we'd get something for ages just didn't know we'd actually get it. Casino Royale, Skyfall, From Russia With Love, Thunderball and On Her Majesty's Secret Service are my top choices. Hopefully this is paving the way for an eventual release of the rest of them. I like they're going with something from the title sequence. Except For Your Eyes Only????? Isn't that a still from The Man With The Golden Gun??

Also, has anyone seen this? 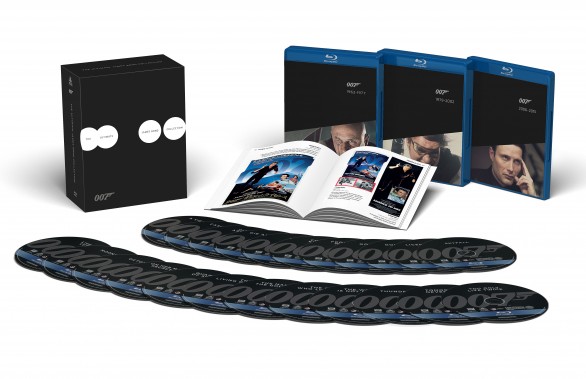 The discs look near identical to the Bond 50 yet.

They probably ARE the same. It's all just packaging and new use of pictures, graphics and cardboard we're paying out for.

Neither - I'm set with the Bond 50 Blu-ray collection.

Trying not to care, but when it comes to some of these things the Force is weak with this one.

Move along, move along.

'Everything or Nothing' on Blu-ray is tempting, but the 720p rip I took from its online broadcast is good enough for me... I'm sure the set will end up being under its current $300 price-point, but *yikes*!

I'm not counting on the DAD bonus stuff ever being ported to Blu-ray. My hopes of ever hearing the 'Quantum' commentary also wane more and more each day.

I don't even have the 50th anniversary set, although I did pick up a few of the individual films when they were on sale for cheap, and I can't think of a reason to go for this either.  They're just going to keep reiussing the same set each year there's a new film, so it would seem like there's time to wait on this.

I will continue to wait for new transfers. Bond 50 set is good enough.
I believe they may hold the new transfers for ultra high definition too.
Some titles may come out when an uhd blu ray player is released. Then I suppose a big uhd bd set when bond 25 comes to theaters.
Hopefully uhd tvs are reasonable in price by then.

Time will tell.
I do like the packaging on the new set. It's nice they are including digital copies too.

There'll be a market for a new box set come October (there are still people who own one), so it'd be foolish not to release a new set. What else should they do? Re-Release the old set and force customers to buy an extra SF and an extra SPECTRE disc (which don't match the anniversary set), both at the price of a regular BD? That would be rip-off. Once a new Bond movie is out, there'll always be a new box set. This is mainly aimed at the mass market, not at the fanbase.

Those steelbooks, that's an entirely different kettle of fish. They certainly look nice, but when I look at the price, I'm not certain if I'm willing to pay lots of extra money just for that. 7 of them for 167.69 Euros when I can get the new set of 23 for 150?. Following my grandfather advise here: Don't buy what you could use, only buy what you really need.

Last time I spent big money on a Bond collection was for the SE Monster Box, which was almost 15 years ago (picked up one or the other of the UE 2-discs when I found one for a fiver). Only BD I have is SF, so this new set could be an option for me.

The steelbooks dent and scratch easily.
If you don't have the bond 50 set this new set would work. However cost wise the bond 50 set and buying Spectre when it is released should be cheaper.

Have just over 300 steelbooks, so I'd be kidding myself if I said I won't be picking these up.

Why is Dr NO not included ? The villain worked for SPECTRE

No idea why Dr. No wouldn't be included, especially since 007.com specifically states they are releasing the films that included Spectre. He even has a speech about the organization!  That movie would make more sense than FYEO. If the connection is only the films that include Blofeld... well that would be prematurely saying something about "Spectre," wouldn't it?

Those of us in the States never got a release of EON, so its inclusion here is most welcome and will probably cause me to sell my old set and buy the new one once the price drops.

Nice to see Skyfall have the same artwork as the rest as well. Curious to see if they changed the menu to match the rest...

Funny that DAF is considered a SPECTRE film because of Blofeld, but the organization's name curiously doesn't come up in it at all. The henchmen wear the usual black uniforms in the precredits but switch to blue later on during the rig battle. Blofeld is wearing the SPECTRE signature ring, though.

The focus seems to be on Blofeld.  Which does not make any sense since the bad guy in SPECTRE is called Oberhauser.

The focus seems to be on Blofeld.  Which does not make any sense since the bad guy in SPECTRE is called Oberhauser.

Yeah, not the most subtle of marketing strategies, is it?

The British amazon edition has a nicer cover - but still...

The British amazon edition has a nicer cover - but still...

Pretty much par for the course, it seems.  The UK artwork is almost always superior, at least when compared with what we get here in the US.

I imagine the 4K transfers are coming for UHD blu ray when Bond 25 hits theaters.

Quite a few here that are being held back until then. This way MGM gets another dip on the current masters. Then they can issue these as new transfers with Bond 25...

Individual titles and covers are up...

Figures that they wait for the second-dip of Blu-ray releases (or in the case of some of the films, the third) to get some decent artwork.

Individual titles and covers are up...

The white works in some cases but...

The new covers remind me of the 80s fox VHS covers!!

You can tell they no longer have an art designers left or any home video department what so ever!
I looked for a few of them but haven't searched for them all...

Again! These are the same discs as previously released. They are including a digital copy.

Some of the artwork really is embarrassingly bad. Wow. Agreed! Thanks for posting some of them!!!