Station M for Marrakech is reporting some bits about B24.

The local press reported the presence of Sam Mendes and Daniel Craig in Morocco mid-September, allegedly preparing to shoot B24. According to this site, they could be aiming for Tangiers, a classic of spy films.

Other press outlets in Morocco have mentioned the presence of Craig and Mendes at the time, but to be fair I'm not sure what to make it. There's really little evidence.

Thanks MkB. A quick correction: the article says that according to the newspaper's information, Craig and Mendes could come to Tangier for teh shoot, not that they (at least Mendes) have actually been there yet. :-)

Station M for Marrakech is reporting some bits about B24.

The local press reported the presence of Sam Mendes and Daniel Craig in Morocco mid-September, allegedly preparing to shoot B24. According to this site, they could be aiming for Tangiers, a classic of spy films.

Other press outlets in Morocco have mentioned the presence of Craig and Mendes at the time, but to be fair I'm not sure what to make it. There's really little evidence.

For those who missed it before, Craig was in Marrakech with his friend Mark Strong late last month.

Ah sorry, I had missed it before indeed, it's old news then!

Tangier and Austria? Are we getting a remake of TLD perhaps?

Statement of the director of the Moroccan Office of Tourism noting that MI5 and the next James Bond movie are being shot in Morocco.

Caught this a while back, but the one thing is that why all locations are great for what they are, the Bond films do have a history of having one place double for another. Who knew Spain could look like Cuba? etc..

I suspect this *might* be something similar, but clearly they will be filming there.

According to this piece of news, Bond 24 will be shot in the Al Haouz province (http://en.wikipedia...._Haouz_Province):

According to this piece of news, Bond 24 will be shot in the Al Haouz province (http://en.wikipedia...._Haouz_Province):

P.S. Maybe a mod could tweak the thread title slightly, and we could make this the permanent Morocco discussion page?

Hmmm.....Seems it could present itself as anywhere, yet still could be credited as what it is. I guess it depends on the story and script and where (timeline) in the film it appears. Interesting.

El Haouz is the area where DC went on a hike with Mark Strong. Maybe he was scouting a little bit?

From what I can tell from the pictures, it offers some landscapes quite similar to Afghanistan... wasn't there a rumor some years back, that EON was in touch for some Afghanistan area experts ITO script development?

Of course, the term "in the Al Haouz province" can mean a lot. It may of course double for Afghanistan or any other country of the like. Marrakech is located there, the Atlas Mountains are also close, but why go to the Atlas when they're already in the Alps (which will quite clearly not double for anything else). But the main question is: Why aren't they going to Ouarzazate (which is just outside the Al Harouz province)? The Atlas Film Studios are located there, with facilities and skilled local crew at hand, and they've already been there to shoot TLD (where it double for.... Afghanistan - big surprise).

Now we have two options:

One - it's all a bit of local bragging. Craig and Mendes were in Marrakech and may have had it as a local base (and eventually keep it as such), but they're actually going to shoot in Ouarzazate. Marrakech is much more comfortable (and maybe safer, too) for Westerners, and is kind of an in-location, and it's not too far away. Local bus takes four hours, so it's o distance for a couple of Range Rovers or even a helicopter.

Two - they're really going to shoot in the Al Harouz province. So, what's so unique in that province? What is it that they can't find in or near Ouarzazate (which was good enough for Lawrence of Arabia, The Man Who Would Be King, TLD or The Mummy).  The answer is simple: Marrakech itself.

Personally, I hope for Number Two. I've always hoped for a Bond movie to shoot in Marrakech. It's simply an incredible place, a real "thrilling city". Been there a few years ago. Those who've been on board back then may remember my Tangiers location report from that trip (note to self: gotta restore that article from the CBn archives). Perfect reason for another visit. All I need is an exact date. I've already checked flight plans and availability at my favorite hotel there...

As I understand it, they are also filming in Casablanca (along with Tangier) - I'm starting to get the feeling that Morocco is Morocco in this.

It definitely appears as though we'll have some relatively diverse locations this time around. Not long now.

A globetrotting Bond with many locations that promise to be sunny and not dark, rainy and dreary (like in SKYFALL).

I concur that Marrakesh should be utilized for all that you mentioned. We're a month out from cameras spinning, but I'm expecting the PC to be big and probably in Rome. It does seem as though Austria will be the climax/third act IMO. Italy and Morocco will be the build up and/or the PTS sequence will set them both up.

Then again, I'd like the old formula to return. Something sinister happens, MI6 called in and Bond ordered to "wrap up" whatever he's in the middle of and report in and whatever it is being unrelated to the current adventure (i.e. - GF, TB, MR, OP etc.).

Was a bit of work but I managed to get this restored (good that I still had the original images on my computer). Lots of rubbish in there (was written with the full enthusiasm of someone who had just returned from a wonderful trip), but for those who like a bit of travelogue...

Apparently, sets are now being constructed in Morocco!!

Good stuff! I guess we'll find out for sure at the press conference...

Apparently, sets are now being constructed in Morocco!!

The photos are not of set construction but of a camera rig. They might have been posted by David Gray to Instagram with a #Bond24 tag, but they were taken a while ago and he is in Morocco working on M:I 6. They are most likely for that.

I don't think they'd be putting together a camera rig for Bond 24 right now.

Bond 24 is going to film on Morocco.

David Gray posted in Instagram with a #Bond24 tag.

Bond 24 is going to film on Morocco.

David Gray posted in Instagram with a #Bond24 tag.

Bond 24 is not filming there until next year. They wouldn't be putting together the camera rigs months in advance.

And for digital cameras at that. Bond 24 is being shot on film anyway.

David Grey is also working on M:I 5, currently shooting in Morocco, on digital.

People working on Bond 24 have a confidentiality clause in their contracts. I'm quite certain they are not permitted to stand around photographing their work and posting it straight onto the internet with a #Bons24 tag for good measure.

Possibly new photos from the Crew in Morocco.

Possibly new photos from the Crew in Morocco.

Looking at his Star Wars Episode VII pic, I take it, he's from the same crew that worked on Stars Wars in Morocco. Fascinating.

Okay, Tangier it is, along with Erfoud.

Tangier, we all saw in TLD and Bourne Ultimatum.

Erfoud is in western Morocco, close to the border to Algeria. Apparently, Parts of The Mummy and Prince of Persia were shot there. Looks like this: 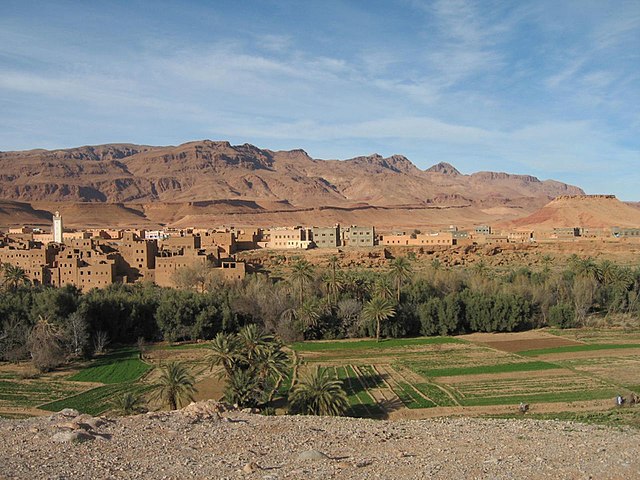