69 replies to this topic

I still think there are other places dramatically it would have worked better and it took me out of the moment for a second. Just hope they don't go shoe-horning the word in for future installments just to appease the PG-13/12A market - which is how this felt to me...

We had Dalton, brutal and gritty, in 'Licence To Kill' with "Watch the birdy, you bas**rd." and his defiant "Piss off."

And let's not forget the first ever "swear" word in the Bond films uttered by the wonderful Mrs.Bell... "Ohh sh*t!" 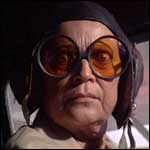 Secondly, Connery said bitch in DAF: "Bitch. You're troubles are behind you now." When he sticks the master tape into Tiffany's bikini bottom.

They can't have it both ways, either Bond is a 'clean act' in which case no swearing or they acknowledge it is for grown ups and they let him smoke.

Admittedly, everyone has their own opinion on this, and different perceptions of what they consider acceptable and unacceptable. My position is that I'm happy for Bond movies to consider occasional swearing at particular moments, but I don't want Bond to smoke. I don't think you need to have one to have the other, or vice versa, but appreciate others' thoughts on this will vary.

Use of the word once is apt as it was used once in the novels by Fleming.

I think it was Dr No. (But I'll stand corrected by any Fleming aficionados).

In the novel YOLT Bond refers to "Father Uncle Charlie Katie" literally, whilst talking to Tiger who'd said that the Japanese don't have swear words but tend to say "Shimata" - 'I have made a mistake'

If you think all the way back to Goldeneye, when she calls Bond a 'misogynist dinosaur'. She was confident, assured in her role and put Bond in his place.

In contrast, Skyfall shows M at her most unsure, her relationship having developed with Bond and it's now Bond coming out with the put-downs. "I read your obituary of me. Appalling." (paraphrased).

I thought that Dench's M in the Brosnan era was supposed to be Barbara Mawdsley wheras in the re-boot she's Olivia Mansfield a completely different person ?

The F-Bomb IS dropped. If you look at the information on the 12 rating on the back of the blu ray case it clearly states that the film has one use of strong language.

I'm not really a fan of shoe-horning an F-Bomb into a movie. Especially in a family film. Other films which have an unnecessary F-Bomb are X-Men: First Class (although admittedly the context in which its used is genuinely quite funny), The Wolverine, Pacific Rim (according to the BBFC guidelines although I myself didn't notice it...) and criminally in Super 8 which is a wonderful movie and just did not need it.

As for its use in Skyfall I must admit I wasn't a fan. I hope this isn't the setting of a new standard where all future Bond films will have a "Freddy Uncle Charlie Katy" (to quote the literary Bond) moment in them.

I forgot about the novel Goldfinger (chapter 15), he says to Goldfinger “Then you can go and ----- yourself”.

I thought it was entirely appropriate given the circumstances. And , yes, classy, compared to say, the entire script for DAD ("Yo Mama!" "Can I leave it in just a little longer?" "They feast." etc. etc. etc. )

I've heard that Dame Judi has quite a potty mouth off camera as well. Which makes me love her even more.

Agreed.  M's use of an expletive in that situation was appropriate, given the situation, as she'd really messed things up by that point.  I also don't buy this notion that including a profanity such as this is a cheap move for the franchise or a steering the franchise in an inappropriate direction.  For a franchise that features a hardened killer and serial womanizer as its lead character, I don't think it's outside the realm of appropriateness for there to be the occasional profanity.  It's not as though these films are your typical R-rated action films where every other word begins with the letter "F", and they still retain their classiness even if there is the occasional expletive here and there, as has been the case throughout the franchise's history.

I basically think it's a shame that these movies aren't necessarily family films any more than they used to be. The people at EON should really address that. I think it would be rather good if they maybe carry on this trajectory, but do a separate series of new films for the younger audiences perhaps based on Charlie Higson's works?

Then they've got the built in audience for the new Daniel Craig films, and can also have a bash at snaring the Harry Potter crowd. I really think there could be something in that.