A meme that's making the rounds on the web: 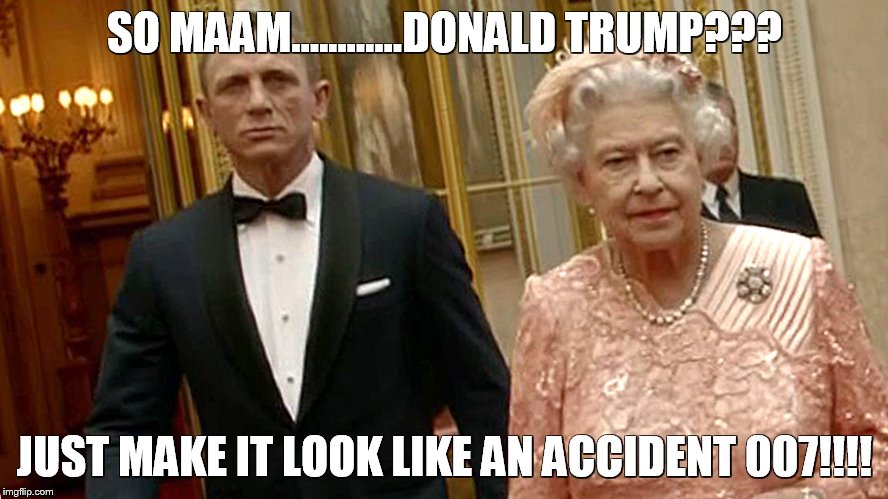 Thanks for sharing, byline!!

If he gets elected, he'll probably face impeachment before he can be assassinated, but either way we know what he'll do next:

Craig's Bond couldn't make anything look like an accident.  All his kills involve millions of dollars in property damage and headlines in all the leading newspapers.

That said, I wish him luck on this one.

I thought political commentary (you know, like promoting the assassinating one of the two leading presidential candidates!!!) was off-limits on this site.

Where the hell is the moderator on this?

Sorry for my absence, it was mainly due to my ignorance of this Trump-species - whatever it's supposed to be when it is at home. Had to call up a number of people across the Atlantic who tried to explain to me. Apparently some rather baffling character. Nobody I ever came into contact with, thank heavens. Supposedly spends a lot of his time with things in his mouth anatomy reasons prevent him to put there for real, much to his chagrin. Amazing what bizzare creatures evolution can produce when just given a few billion years and enough toxic waste.

Anyway, one of the people I spoke to deals in an official function with supposed assassination threats against such extraordinary figures. Thankfully I was assured my concerns regarding the possible promotion of assassination - and a subsequent war between CommanderBond.net and the USA - were entirely unfounded. On the list of this possible 'presidential candidate' we apparently figure only very low. Much lower even than shutting down the Internet itself.

Be that as it may, cannot risk to influence the political process in a blooming young democracy from the strictly neutral grounds of CBn.