65 replies to this topic

I watched Flashbacks of a Fool the other night and was mightily impressed.

Just watched this on DVD over the weekend and thought Craig was amazing. I've loved Stephen Rea since "The Crying Game," and watching the interplay between these two actors was fascinating.

I have the following movies featuring Daniel Craig:

The nature film One Life produced by BBC Earth Films and narrated by Daniel has just been released on DVD in the UK. 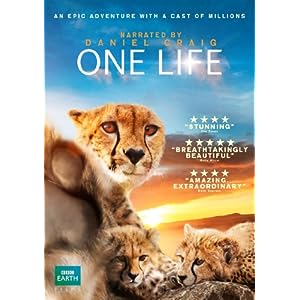 
MH: Working with Daniel was a surprise. I have worked with actors before, but he, in an incredibly subtle way, brought something totally new. And what he did was just do it so gently and so calmly and so deeply, that he brings an extraordinary emotion to each scene. And it was amazing working with him and listening to it as he was reading it. But, actually, when we were laying the commentary afterwards and placing it exactly where we wanted it to picture, it was just incredibly exciting; it just felt that it was getting better and better and better, each scene we did. It was just... really, he’s got a fantastically fresh voice, I think, for narration and it’s really exciting, it’s really enhanced the movie.

The Girl with the Dragon Tattoo 2011

I own..
Dream House (movie that came out last year, I am not sure if that is what it is called, but it also stars Rachel Weisz)
Lara Croft Tomb Raider
Casino Royale
Quantum of Solace
Girl with the Dragon Tattoo