By now, most of you - most of the world - has probably seen that ill-fated BBC interview with a chap whose children come barging in. 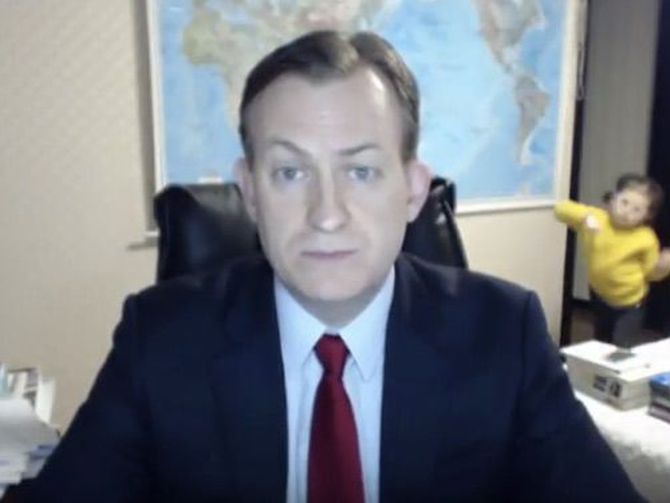 The interviewee, Professor Robert E. Kelly, has his own blog where among other things he discusses Bond.

1. Where are the Americans and Japanese? To my great surprise, we met very few Americans on the trip. Usually Americans are everywhere when one travels. Being a superpower with bases and businesses around the world, Americans are a fixture of the global tourism industry. So much that the term ‘ugly American’ came about – a vague caricature that we’re monolinguist rednecks, like Sheriff Pepper in the ‘Man with the Golden Gun.’ But I didn’t see too many. In fact, we scarcely saw any Americans. And we didn’t see any black American tourists at all. (I’m not quite sure what to make of that; all the western tourists were white.) Ditto for Japanese. 80% of the tourists we met were Europeans. There were 5 Koreans in our safari trip. And of course, we saw Chinese – not just from all the construction projects, but even tourists too. Chinese tourists, but no Japanese tourists? What a sea-change. Is this a sign of the bite of the Great Recession or disinterest, or what?

6. The Cold War was just a Misunderstanding

If there is any lesson to be drawn from Hollywood’s standard treatment of tough topics, it’s that it wants to offend or challenge no one, so as to insure that everyone will buy movie tickets. Hence the multicultural pluralist fluff of KoH or the gentle portrayal of the Japanese military junta in Pearl Harbor.

So god forbid Bond actually battle the KGB. Instead he usually hooks up (literally of course) with some hot Russian agent to battle a rouge financier, industrialist, general, whatever. Even in the Bond film about North Korea – the worst country on earth – the filmmaker didn’t have the guts to make the villain a part of the regime. Yawn. C’mon already. Even the DPRK gets a pass? We think the Bond movies are about the Cold War, but they really aren’t. Usually, the KGB is working with MI6 or the CIA. The real Bond meme straight from the antiglobalization movement – megalomaniac corporate leaders who want to take over the planet. Bill Gates as a psychopath, not Brezhnev, is the real enemy. Bleh.

Star Trek 6 follows the same silly pattern. The Cold War was really cooked up by military leaders on both sides who wanted to rise to power! And the Soviet-Klingons were really peace-lovers, defending their culture and loving their children too, just like Sting told us. Whatever…

My students come to class with some of the most hair-brained ideas about world politics, because spy movies are so ubiquitous and so stupid. Blame Bond of course, but Jack Ryan – with a PhD no less! – has gotten more and more ridiculous too. I stopped reading Clancy novels after Ryan became POTUS. PhDs carrying guns and becoming prez? Gimme a break.

Many of us will quibble with his claim that in DAD "the filmmaker didn’t have the guts to make the villain a part of the regime."

Our own Guy Haines has made the same argument about Bond & the antiglobalization movement.


Kelly has also released a statement about the "viral video" incident,

Thank you for digging this up, interesting reading. Although it seems really a bit pointless. When ever was Bond supposed to be a documentary? I believe that idea hasn't even reached the guy with the funny hairdo yet.

This largely reopens the ages old argument about fantasy spies vs realistic ones without adding a new perspective. Of course his students come to his class with all kinds of silly ideas about the world. But that's not Bond's fault - or Clancy's - but simply the fact they are young and impressionable and still believe in some kind of higher order. Of course we know better, we are thirty years older, we've seen utter nutjobs setting the world on fire. And our wives get taken for the nanny...

No really, I appreciate Professor Kelly's musings, they are word for word what I keep musing over when I suffer a spot of indigestion. But I regularly arrive at the - uncomfortable - insight that my musings are probably more related to my age, not to the actual matter at hand.

The case for Bond as a secret agent of the antiglobalisation movement is a valid one, no doubt. But it's also tainted a bit by the fact Bond is a product as global as you can think of. So the question would be who is really deceived by the ploy? If indeed there are people who understand Bond as a devious propaganda tool; not really sure about that.