Don't know where to put this article, so...
Eight people taken to hospital after being thrown from Memphis fair ride - 14 people thrown from ride - Over a dozen people were injured after they were thrown from an amusement ride in Tennessee.
Adrian Sainz, The Associated Press
Published Sunday, September 4, 2016 4:42PM EDT
MEMPHIS, Tenn. -- Eight people were taken to hospitals after a ride shut down at the Delta Fair in Memphis, officials said Saturday.
Riders were enjoying the Moonraker, which spins around an axis and tilts up and down on an angle, when the ride's computer detected a problem and immediately began safety shutdown, said Matt Snyder, the fair's safety director.
As the ride stopped spinning and began to descend, the operator of the ride panicked and pressed a manual override button that released the safety restraints before it settled into its cradle.
"It scared everybody," Snyder said.
Initial reports that 14 people were thrown from the ride and taken to hospitals were "terribly inaccurate," said Earle Farrell, a spokesman from the Shelby County Sheriff's Office. Fair officials denied that anyone was thrown from or fell from the ride.
Two adults and six children were transported to hospitals after walking from the ride under their own power. None had visible injuries, but some complained their ankles were hurting, Snyder said. Four more people were treated at the scene.
One of the two adults who went to the hospital was the ride operator, who was emotionally shaken by the accident, officials said.
The ride has been shut down but the fair remained open Saturday. The ride had received a technical inspection in the past three years, and two more inspections in the days before the fair opened this week, Snyder said.
A ride inspector is scheduled to check the ride on Tuesday, said fair president Mark Lovell.
The Moonraker ride sits idle after several riders were taken to hospitals after it shut down at the Delta Fair in Memphis, Tenn., on Saturday, Sept. 3, 2016. (AP Photo/Adrian Sainz) 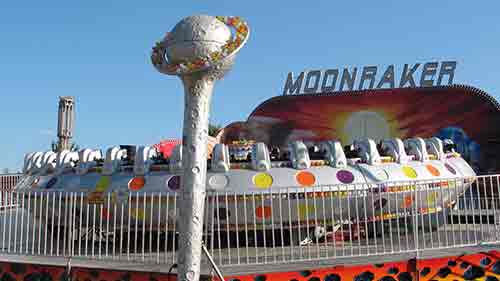 http://www.wbir.com/...ident/313826534
Memphis fair officials apologize for downplaying ride accident
WMC , WBIR 10:44 AM. EST September 05, 2016
MEMPHIS - The Moonraker is still out of service at the Delta Fair after an accident sent seven riders, including five children, to the hospital.
Officials are apologizing for the mishap, which they said was caused when the ride operator pressed the wrong button.
“This is unacceptable to the Delta fair and we apologize it happened,” Director of Safety and Emergency Services Matt Snyder said. “We expect everyone to come out here with the expectation of having a good time and being safe.”
A county code enforcement inspector and a National Association of Amusement Ride Safety Officials inspector both checked out the ride Sunday. A computer feature allowing the operator to release the safety belts while the ride is moving has now been disabled.
“We're having all of BCA's rides inspected,” Snyder said. “Or any ride of that era that might have that type of computer programming.”
As the Moonraker was moving, the safety belts were released. Some people held on, while others fell or slid out of their seats. No riders ever physically fell off the ride, but fell into a middle section, where they hit metal bars.
Some riders suffered extensive injuries.
“One with a fractured leg, one with a fractured wrist, and one with a fractured collar bone,” Snyder said. “It doesn't matter if it's a bruise or a scrape, it's unacceptable.”
Fair officials originally downplayed the incident, because onsite EMS workers said there were no visible injuries. It wasn’t until riders got to the hospital that they learned how badly they were hurt.
They released the following statement, apologizing for the dismissal of injuries:
Yesterday's incidents were very unfortunate and we are grateful that the injuries that did occur were minor in nature and no one was seriously hurt. Our apologies and condolences go out to the individuals on the ride involved, and also to everyone that was under the impression that we were trying to mislead you.
We released the statement on our Facebook Page at 4 p.m. on Saturday. It was not until later last night around 10 or 11 p.m. that we were told about the individuals at the hospital that indeed did have injuries. In no way were our intentions to mislead or lie to anyone and certainly do not want to come across that way.
Here at the Delta Fair & Music Festival, we have tried to be honest and present a track record of being forthright and honest with the public in our 10 year history. We are going to go above and beyond to make sure that this does not occur again. The 2016 Delta Fair and Music Festival will continue to be open until September 11th and we want to welcome everyone to come out for a family­friendly, safe environment at the fair.
Even with the mistake Saturday, fair goers were still riding the rides. Many, however, said they won’t be lining up to go on the Moonraker.
The ride will have to pass another inspection from the State of Tennessee, Shelby County Code Enforcement, and Matt Snyder.

Anybody know what the legalities are when using a trademarked Bond title in a commercial enterprise?

Since 'moonraker' has more than one meaning, I doubt the word itself has been copyrighted.

Rename your Sky Screamer ride 'Skyfall' and EON might have a case.

I suppose they'd be in trouble if their design had suggestive silhouettes of a shooting figure or similar Bond-related stuff. But from the looks it's a pretty generic space-themed ride. The majority of the kids riding this will not even be aware of a Bond film of that name.