You Only Live Twice 2: Back of Beyond

You Only Live Twice II: Back of Beyond 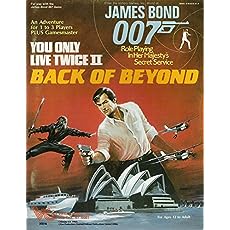 This review is actually not going to be too kind to Raymond Benson despite the fact that I really enjoy most of his works. Unfortunately, Back of Beyond is not one of them and you're welcome to skip the rest of the review if you don't want to hear about his first entry in the 007 semi-canon. This adventure module chronicles an original adventure rather than an adaptation of a movie for player characters of 00 rank. A rare enough action in the RPG series.

Sadly, despite the title, there is no connection to You Only Live Twice. It's false advertising as the adventure takes place entirely in Australia. This little bit affected my enjoyment of the module and caused me to look at it more harshly than I might have normally.

The storyline of Back of Beyond isn't terribly bad. It's a bit sci-fi esque but it works about as well as Everything or Nothing. A villain has developed a chemical formula that will create a literal acid rain that he intends to seed the clouds of enemy nations with. The character has the players track him down to his Mountain lair in the Outback with them arriving just in time to stop the countdown to agents releasing the toxins. There's also the rather silly element of mind control with the 'ear drums' allowing the villain to convert people to his cause. Again, it's a little sci fi and out there.

No, the storyline's villain is where the entire thing falls apart tragically. I mean it FALLS APART. The whole thing leaves me with an uncomfortable feeling and the impression that I'd never enjoy playing this in a million years. Here's the set up....The villains father is a Nazi scientist whom created the formula and he's out to avenge his father's death. Oh yes, did we mention his father was Jewish and it was done under threat to his family? Did we mention that the Bond villain is a Concentration Camp Survivor?

Yes. Provided your characters can defeat the mad and insane plot of this Australian madman then you have the dubious distinction of winning over a Holocaust victim. In what crazy Bizarro world did Raymond Benson think that this makes a enjoyable Bond villain? Yes, the villain is certainly not playing with a full deck but don't you think that he has a right to be? I'd love to track down Raymond Benson and ask him in an interview what exactly he was thinking when he thought this was a good idea? The last thing that ANY Bond character should be feeling when he kills his enemy is pity for the poor bastard.

The rest of the story isn't terribly bad but Australia is portrayed pretty stereotypically with the majority of the NPCs being apparently rejects from the Crocodile Dundee movie set. Except for the villain's henchwoman whom is a Ninja. Yes, a ninja girl actually raises my review score of this work by some points. Sadly, she's the bad Bond girl as the "good" Bond girl in the module is a vapid blonde socialite. The only thing of note about her is her name: Felicity Foxworth. Come on and say it. It's fun to say. It rolls off the tongue well and you can definitely observe "That's a Bond girl name without even having to be dirty."

The adventure isn't very long and like all modules depends mostly on the players dealing with the enemies in a ruthless manner. When I ran the adventure, I honestly couldn't do his origins straight for fear of just hanging their heads in shame after offing the fellow.

I'm amused at your apprehension with regard to a villain who's a concentration camp survivor, after all, thats exactly what Magneto from the X-Men has been for the past forty years.

I'm not sure that it's a valid criticism.

Just bought a copy of this in mint condition from eBay. Hopefully coco1997 will get it signed by Benson for me in September.

It's just a game. It's only a story. And it makes about as much sense as anything else that is Bond-related.